More and more Australian women are choosing to buy cosmetics and skincare products online rather than in brick and mortar stores.

Roy Morgan Research’s latest studies showed that over 5.3 million Australian women purchase cosmetics in an average six months, up from under 4.8 million women in 2014.

Now over a quarter of women who purchase cosmetics buy health and beauty products online (26%) in an average three months, that’s up from 18% four years ago, according to the latest research from the Roy Morgan Single Source in the year to December 2018.

Michele Levine, CEO, Roy Morgan, highlighted the impact of online in the cosmetics and skincare industry in Australia with over 5.3 million Australian women buying cosmetics in an average six months increasingly turning to this platform.

“Australia’s cosmetics industry has grown significantly over the last four years with a majority of 51% of Australian women (5.3 million) now buying cosmetics in an average six months up from 49% (4.8 million) four years ago. Increasingly the place to be to capture a growing slice of this rising market is online,” said Levine.

“In 2018, over a quarter (26%) of women who buy cosmetics bought health and beauty products online including cosmetics, skincare products, fragrances, perfumes, aftershave and health products, up from 18% only four years ago in 2014.”

Internet buying of Health & Beauty including cosmetics cf. place of purchase for cosmetics 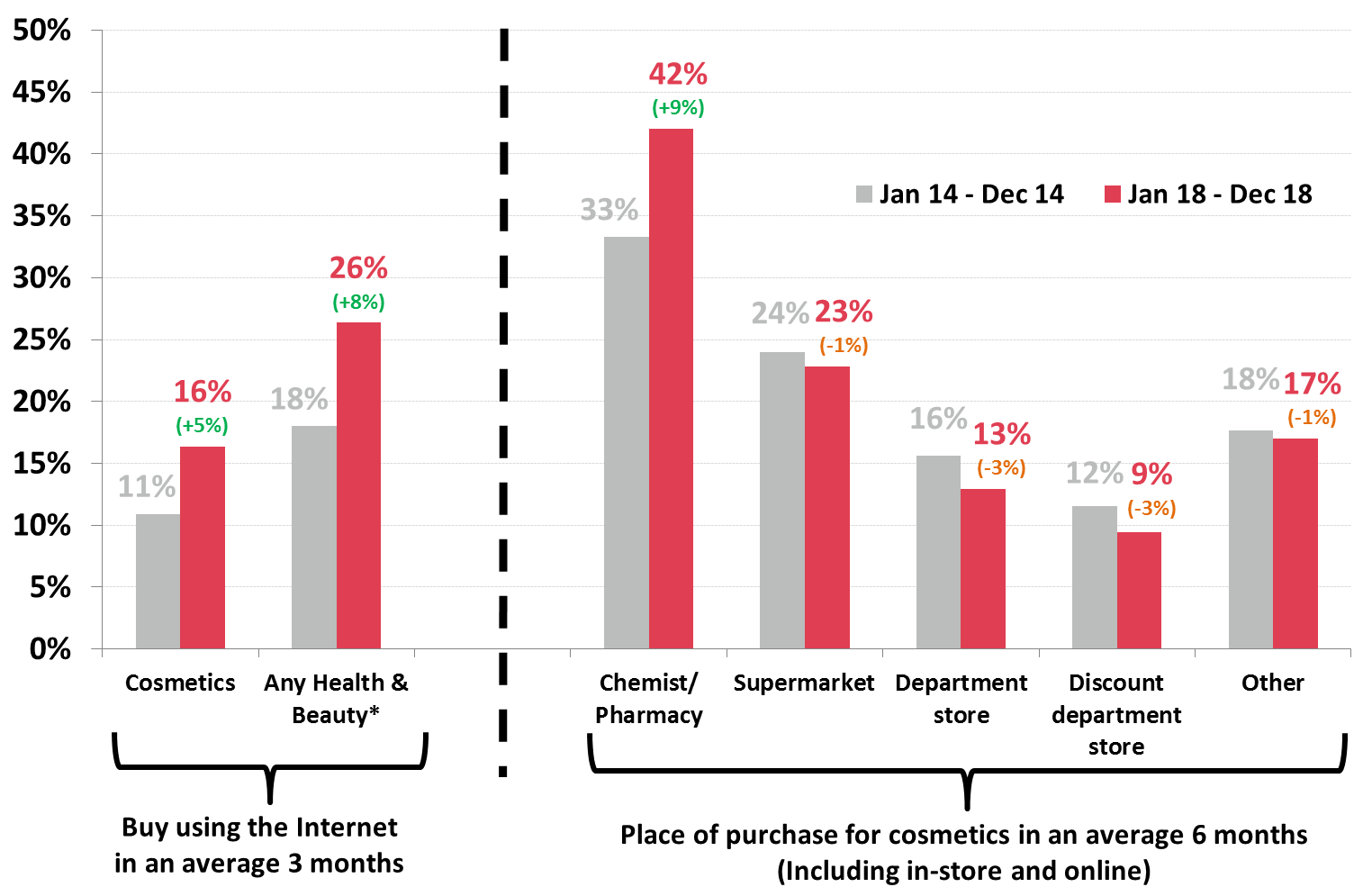 The shift in how Aussies purchase cosmetics and skincare affects stores carrying these products. The research showed that chemists and pharmacies such as Priceline, Chemist Warehouse and My Chemist are winning since they have click and mortar stores.

Now 42% of women who purchase cosmetics in an average six months buy from chemists and pharmacies, whether in-store or online, up a significant 9ppts from four years ago.

“Although the market is growing quickly the increasing shift to online will catch out retailers with business models not suited to the new realities. Already this year high profile Australian make-up retailer Napoleon Perdis has entered administration with the immediate closure of half their stores as competitive pressures became too great,” said Levine.

“The entry of online retailers such as Amazon to the Australian market provides additional competitive tension but the success of Australian chemists and pharmacies in growing their online presence proves that with the right strategy there is growth to be had.

“Now 42% of women who buy cosmetics buy from a chemist or pharmacy – whether in-store or online – up 9ppts in only four years despite the increasing shift online. Over 21% of women who buy cosmetics have bought from Priceline/ Priceline Pharmacy and nearly 15% have bought from Chemist Warehouse – clearly the two market leaders. Chemist Warehouse even bills itself as ‘Australia’s Cheapest Online Pharmacy’.”